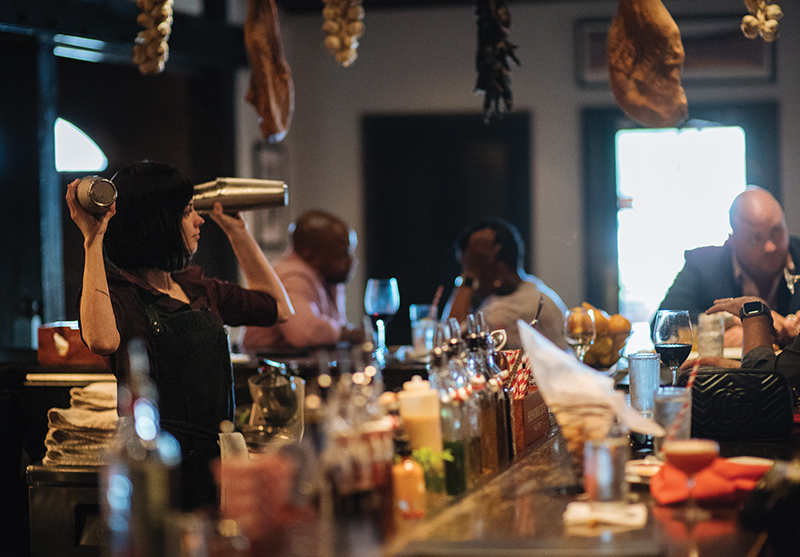 “The owners of Pamplona’s Tapas Bar studied the culinary landscape of downtown Lafayette, examining what was being offered and, most importantly, what wasn’t. Even though Louisiana’s heritage contains decades of Spanish rule, the Spanish culinary heritage was missing from the town where most restaurants gear their menus with Cajun and Creole traditions.

So, in December 2007, Pamplona’s Tapas Bar opened, with Spanish tapas the focal point an a full bar offering Spanish wines, specialty cocktails and both red and white sangria. What makes the bar scene special — besides the photos of Ernest Hemingway, portraits of bull fighters and an actual bull mount — is that Pamplona’s mixologists create cocktails in a pre-Prohibition style, explained General Manager Andrew Payne.

“Everything has to be fresh,” Payne said. “No mixes. Juices are squeezed daily.”

Pamplona’s sangria, for instance, incorporates fresh fruit and juices, wine, Triple Sec with pear schnapps in the white sangria and cherry brandy in the red.

Customers still ask for traditional cocktails, Payne added, and Pamplona’s serve up the classics as well as signature drinks. In the past, Pamplona’s has participated in Lafayette’s Absolut Best Martini contest, offering their unique twist on the standard cocktail.

“We take the classics as our base and we have a few originals we make and we try to change things up seasonally,” he said.

Pamplona’s also serves 10 types of absinthe, two of which made are made in the U.S.

Read the full story at My New Orleans